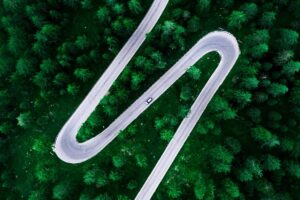 We all know that electric cars are the future of transportation. They’re more environmentally friendly, they’re more efficient, and they just make sense all around. In fact, the International Energy Agency predicts that the number of EV’s will reach a whopping 145 million by 2030. That’s good news since the world is finally trying to wean itself off of its dependence on fossil fuels.

But there’s still one question on everyone’s mind: what is the environmental impact of electric cars?

Will they really help to save our planet, or are we just kidding ourselves? Can we expect to completely nullify our environmental impact by switching to electric cars, or is that just a pipe dream?

Unfortunately, there’s no easy answer. The environmental impact of EV’s is a complicated issue and depends on several factors. Let’s dive deeper and take a closer look.

Electric cars function by plugging into the electrical grid and drawing power from there. The electricity is stored in batteries, powering the electric motor. It means that to be genuinely effective, EV’s need to be part of a larger system that includes a reliable and sustainable electricity source. It’s important to note that electric cars don’t have tailpipes, so they don’t emit harmful gases or pollutants.

Tesla, a leading manufacturer of electric cars, accelerated the world’s transition to sustainable energy in 2020 by eliminating 5 million metric tons of carbon dioxide emissions from the environment. Tesla also bagged the second highest green score of 53.75 on the environmental ranking list of leading automakers in 2022.

On the contrary, gasoline cars rely on internal combustion engines that burn gasoline or diesel to power the vehicle. The exhaust contains harmful pollutants like carbon dioxide, nitrogen oxides, and particulate matter. A typical passenger contributes 4.6 metric tons of carbon dioxide to the atmosphere yearly through their car alone.

These emissions cause severe environmental damage, including air pollution, acid rain, and global warming. In fact, the transportation industry is responsible for about 28% of all US greenhouse gas emissions, easily making it a leading contributor to climate change.

So, in terms of environmental impact, electric cars have a clear advantage over gasoline cars. But that’s not the whole story 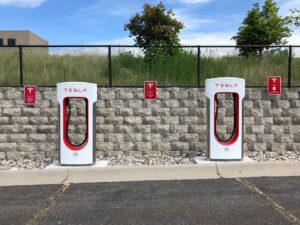 Where Do Electric Cars Get Energy?

On the bright side, renewable energy sources like solar and wind power are available and soon will become prevalent when it comes to powering electric cars. A study by the National Renewable Energy Laboratory found that, in 2030, 81% of light-duty vehicles could be powered by renewable energy.

So, as the electricity grid becomes cleaner, the environmental impact of electric cars becomes smaller.

Here is another blog post about the sustainability of electric vehicle charging stations, titled:

Considering the hike in oil prices, EV’s seem nothing short of supernatural intervention. But as with anything else, electric cars have their own environmental concerns, the biggest one being the manufacturing process.

The manufacturing process of electric cars can be quite resource-intensive. For example, the Tesla Model S requires 63 kilograms of lithium to create just one 70kWh battery pack. And a single electric car contains about 83kg of copper, which is 60kg more than what’s needed for a gasoline car.

Electric cars also require rare earth metals like neodymium and dysprosium for their motors, which only exist in a few places worldwide. All of this mining and extraction takes a toll on the environment. It causes water and air pollution, as well as environmental destruction.

In addition, EV’s require twice as much energy to build as gasoline cars. It could be because of the large battery packs or the more complex motor technology. But whatever the reason, it’s important to remember that electric cars‘ environmental impact doesn’t end when they drive off the lot.

What Happens When EV’s Battery Dies?

Have you ever wondered what happens to electric car batteries when they can no longer hold a charge? Well, it turns out that they’re not as eco-friendly as we thought.

When an EV’s battery dies, it’s considered hazardous waste and must be disposed off properly. But there aren’t many recycling facilities that can handle these batteries, so often, they’re just thrown away.

And since electric car batteries are made of lithium, cobalt, and other rare earth metals, they can be a fire hazard. In fact, studies reveal that taming a lithium-ion battery on fire can be extremely challenging.

However, many car manufacturers like Nissan, Volkswagen, and BMW are working on recycling programs for electric car batteries. So, in the future, the environmental impact of these batteries will be reduced. 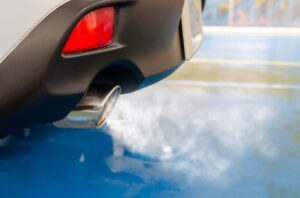 Why are Electric Cars Still Better?

What’s one factor driving people to transition from traditional gasoline to electric cars? The environmental impact, of course!

Electric cars have a much smaller environmental footprint than gasoline cars. They come out on top in terms of eco-friendliness throughout the co-ownership period, especially during the “use phase,” where the environmental benefits are the most prominent.

Since no fuel is required, we can save a lot of energy by preserving fossil fuels. In addition, EV’s don’t release any harmful emissions into the atmosphere. So, they don’t contribute to environmental pollution or climate change (when driving).

Electric vehicles have surged just recently. Therefore, it’s too early to make a definitive statement about their environmental friendliness. Maybe we will observe some technological advancement that makes EV’s even more environmentally friendly.

In the meantime, we can only hope for the best and try to do our part in saving the planet. Last month we did a blog post about Thrift Shopping, please check it out! If you can, switch from a gasoline-powered car to an electric one at your earliest convenience. The sooner we start reducing our carbon footprint, the better!