October 26, 2018 / by EasyDumpsterRental
Filed Under: Uncategorized

Types of dumpsters: helping you get what you need 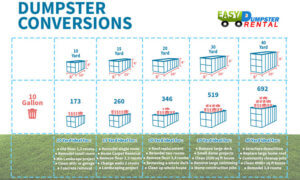 There are a wide variety of reasons why a person may need a dumpster. More commonly, a person gets a dumpster or dumpsters as a more long-term thing. Other times, it may be for a small-time thing, which generally turns out to be a one-time thing or just short-term. When picking out a dumpster – whether it be a permanent thing or a temporary thing, a large dumpster or a small dumpster – you need to make sure that you get the dumpster that works best for you. In turn, we will help you pick it out.

In the event that you just need a dumpster for a single occasion, something like a rental service is likely going to be your best bet. In doing so, you can rent it just for the amount of time you need it – ie, if you are throwing a large party or you need a dumpster when throwing out a large amount of trash from a building you are cleaning out. And if you need the dumpster for longer than you intended, you can just as well extend the rental period.

The type of dumpsters are important too 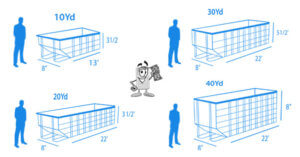 When all is said and done, one of the most common types of variances in dumpsters is going to be the size of the dumpsters. While dumpster size may not seem like a big deal, it most certainly is. Basically, the kind of dumpster you get – whether you purchase it or rent it – is going to depend on the amount of waste that is being generated.

It is not at all uncommon to see someone use multiple, categorized dumpsters to help sort different types of materials. There is a multitude of reasons for this. Most commonly, it’s just for convenience. There are a lot of companies or individuals who may just well use one dumpster for all materials, but there are others who will use multiple dumpsters because they may need to dispose of certain types of refuse separately from other types. Some removal companies may not be inclined to deal with a mess of trash and would expect in turn that your trash neatly.

Getting separate dumpsters for ethical reasons

For both individuals and corporations, you will find a number of them who take their disposal of waste seriously for ethical reasons. This is because of people’s worry about the environment and their impact on it. This concern has grown more significant in recent decades due to rising evidence of a human-caused impact on the environment, so some people take charge to avoid wasting recyclable materials. While there is a debate about whether climate change is a thing, and if it is whether humankind is making a substantial impact on it, a number of people either believe the data or figure “better safe than sorry.”

Categorization for health and safety reasons

This kind of categorization, you would expect to see more often in a hospital setting or an elder care facility. Both for medical waste and biohazardous waste, you definitely are advised to find someone who is able to handle either or. Mismanagement of these things can be highly dangerous, as can it be if you throw out these things with regular waste depending on what is being thrown out.

Medical waste should be discarded separately from regular waste because of the kinds of things it may carry. Disease, infection, etcetera, the kind of stuff that you definitely do not want to have this “get out into the wild” as it were. Things like medical equipment and anything that may have come into contacts with potentially hazardous substances like blood. Biohazardous waste works in much the same way, as you might expect. A lot of biohazardous waste confers the same issues of medical waste – ie, it’s the kind of stuff that you do not want to expose other people to. Biohazardous waste covers similar issues – infections, blood, etc. However, it also covers things such as radioactive materials.

Mind you, this is not just a moral or ethical reason to not mix your medical waste with regular waste, it is also a legal reason. Not all states have the exact same laws that govern how you are supposed to dispose of medical waste, but a lot of states may put their foot down if they were to find out about improper disposal thereof.

As discussed above, medical waste disposal is regulated on a state level, but no state is guaranteed to have the same laws as another. Working with a company that handles medical waste and is well-versed in the laws of respective states is a good way to avoid getting in trouble for any mistakes or missteps.